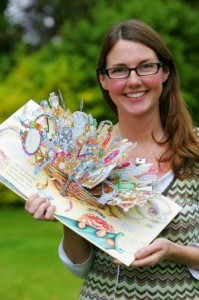 Jennie was born in London in 1970. Her mother and father met at Chelsea School of Art and are both artists. They now run the art magazine Raw Vision.

She went to Central St. Martins School of Art and studied Illustration. Her first commission was to design and make the window displays for Harvey Nichols department store as part of London fashion week. She also produced a number of nationwide window displays for The Body Shop and Dillons Bookstores.

Jennie has always enjoyed working in 3D, so pop-up books were a natural transition. After leaving college she met Kate Petty. Kate was a truly fabulous and very talented children’s book writer. Jennie and Kate worked on eight books together over sixteen years.

The books they produced have sold over two million copies worldwide. “The Great Grammar Book” was nominated for Children’s Book of the Year 1999 and “The Global Garden” was winner of the Aventis Prize 2006. Very sadly, Kate died on May 22nd 2007.

In 2015 Jennie came up with the idea of Sketchbook Club as a revolutionary way to teach art which she describes as “literally like following a recipe”. Sketchbook Club has become a huge success featuring in The Guardian, The Telegraph and The Simple Things Magazine.